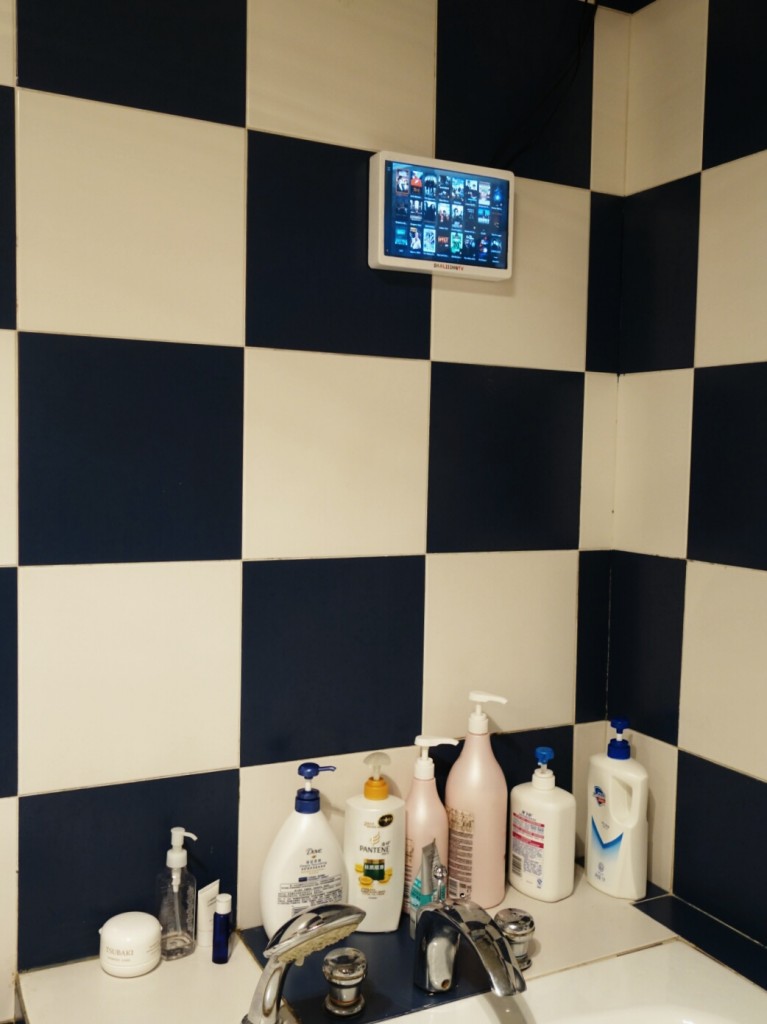 This is a small project I did for my better half — I noticed she always had the iPad on full volume when having a shower. As she is busy studying for her masters, that’s about the only time she has to “watch” TV.

I thought I’d make it easier for her by putting a waterproof screen on the wall. My first thought was a waterproof tablet, like the Sony Xperia. However, that would be (a) no fun; (b) expensive; and (c) touchscreens don’t work at all when wet. So I decided to build my own.

For software, I used RasPlex. It fits in well as we have a number of Plex devices in the house already, and it also provides an Airplay sink. So my wife can just send whatever she’s watching on her iPad to the screen on the wall. And the entire thing can be controlled from any mobile device with Plex.

This isn’t a set of instructions or even a build log — like most things, the build was more trial and error than meticulous planning. It’s not difficult if you decide to build your own. That said, I was asked by a couple of people to post details, so here goes…

I ordered nearly all my parts from Taobao (China’s eBay).

All of these were from Taobao, with the exception of the UPiS, which I ordered from modmypi.com.

The entire thing is powered from the 12V 5A PSU. This is housed in the waterproof project box and hidden in the ceiling. It can be turned on and off using a spare light switch.

The 12V output from the PSU then feeds through (via waterproof grommets) to the screen — specifically, the LCD module (which requires 12V) and the UPis (which converts 12V to 5V for the rest of the hardware).

I use the UPiS to coordinate graceful shutdown when the light switch is flicked off. It detects the loss of power, but can provide backup power to the Raspberry Pi. Once the power loss is detected, it signals to the Raspbery Pi to shut down. Without this, file corruption could potentially be a problem after thousands of cycles of powering off without shutting down gracefully.

I wrote a small Python script so that the RasPi could query the UPis every few seconds to determine if the power had been cut.

One detail worth noting is that I had to remove the composite and USB ports on the RPi in order to get it to fit. I then directly soldered in wires for my USB devices. This saved a lot of space. 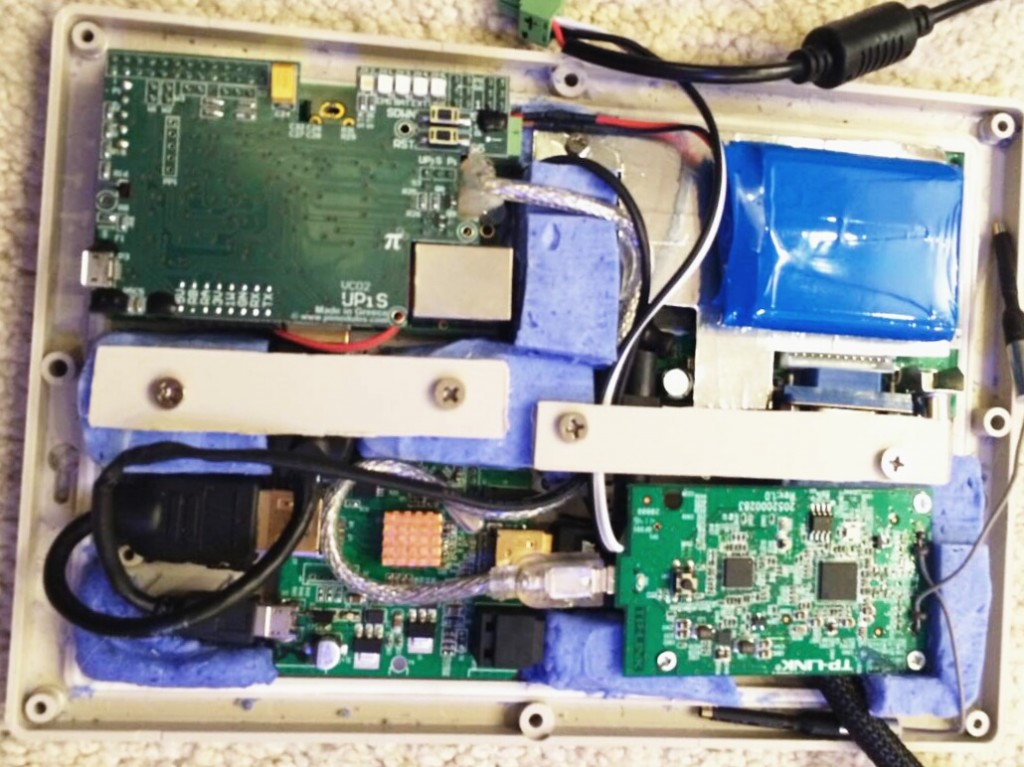 Obviously this is pretty light on details, but I figure that no two builds are likely to be the same here. I tried to make use of what I already had lying around. In the picture above, the RaspPi is in the top left with the UPis on top of it. To the right you can see the UPiS battery. Below this is the LVDS converter board. On the bottom left is the HDMI audio extractor, and on the bottom right is the Wi-Fi dongle.

After plugging in everything and testing, most of the work involved carving up the project box and waterproofing it. To fit everything in, I made standoffs out of “Oogoo” (A silicone / cornflower mix, in my case coloured with blue acrylic paint), but you could also 3D-print them. The inner portion of the project box was already waterproof. Obviously once I had cut out the hole for the screen, this was no longer the case, but I managed to seal it around the front (behind the glass and screen) with a large Oogoo gasket and some 3M mastik tape. This presses the front of the glass to the inside of the ABS box, with a bead of silicone to fill the gaps and make it waterproof.

I chopped the box down thinner, filled gaps, and finished it with some acrylic spray paint and clear coat. And some cutesy stick-on lettering. And, tadaaa… 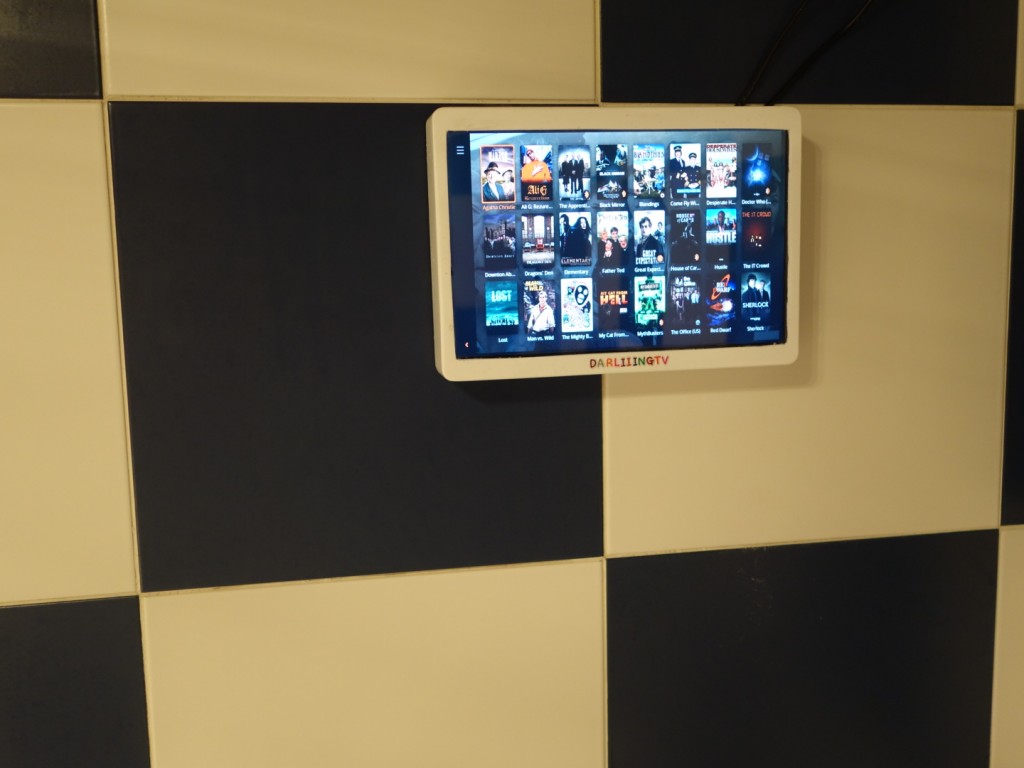